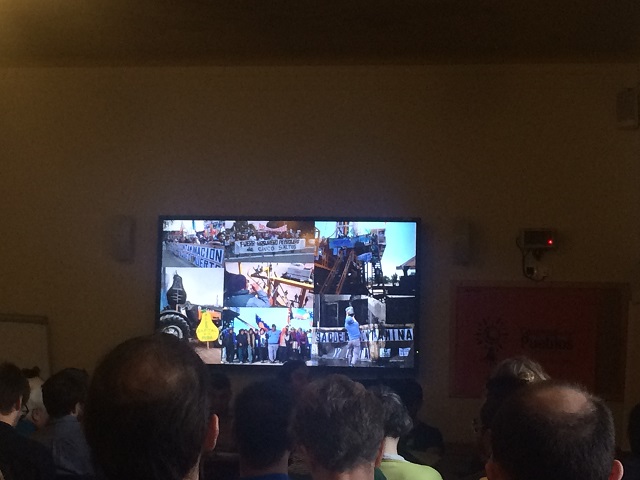 Here are five things we learnt:

This economic model relies on the extraction and �pillage of national resources� to be sold overseas. In Argentina this has led to the state cultivating a discourse of needing extractive industries, like oil, in order to �develop� and redistribute the country�s wealth. But where to? As usual the benefits flow to the elites of the Global North at the detriment of those in the Global South. Similar to the challenges facing climate justice organisers in Vietnam - who we heard from back in February - this discourse of �development� is used to shut down opposition to fossil fuel projects and this neo-colonial approach has led to some stating that Latin America �remains a colony�.

The cultural and environmental rights of indigenous folks are consistently being subordinated to the interests of foreign capital. In Colombia, which is an inter-cultural and multi-ethnic nation, the cultural survival of indigenous folk is threatened. As the government doesn�t protect indigenous rights in a meaningful way, it is difficult for free, prior, informed consent to be obtained by communities who then have their lands become the operating facilities of extractor fossil fuel companies. A model is being imposed which forces indigenous peoples to become disconnected from their territories. Some have no choice but to become employees of the fossil fuel industry in order to survive. When there are attempts to reclaim their rights through protest, the state represses action as if it were �armed insurrection�.

Whilst BP would be too afraid to frack in the UK due to reputational damage, in Argentina it is a part of the Vaca Muerta mega project. This is through its 50% ownership of the Pan American Energy Group. Vaca Muerta - which borders areas supplying drinking water to over 500,000 people - is the second largest gas field ever discovered at 30,000km-squared. For comparison, England is 70,000km-squared. Since 2011, Royal Dutch Shell have also been expanding their business in this unconventional fossil fuel, having been contracted to frack 1000 wells in Argentina. These projects are taking place despite mass opposition. Some municipalities have banned fracking in their territories - a move which has then been overturned and overridden at the state level. Those who are involved in the anti-fracking movement in the UK will recognise this type of action from Lancaster County Council�s fracking refusal being overturned by the Secretary of State.

Bilateral trade agreements have been negotiated between Argentina and the UK. Whilst individuals have been refused access to the documents resulting from the visits made by Greg Hands MP which led to these, the notes sourced by Greenpeace about his visit to Brazil are telling: lessen environmental protections so that UK companies can exploit natural resources. Through export credit - the government insuring the business ventures of UK corporates like BP overseas - and direct financing, the UK state is a participant in the exploitative business models of multinational companies. These are companies who have been complicit in the �Dirty War� against anti-extraction organisers, with over 400 environmental defenders having been murdered since 2016 across the world. In Colombia, BP paid the Ministry of Defence $8 million to use their capacity to crush dissent against their operations. Not only did this involve the national army and police, but the paramilitaries, who have actively targeted and murdered organisers against Big Oil.

Frontline communities are using localised forms of resistance against the operations of fossil fuel imperialists through the media, direct action, calls for international solidarity, and mass mobilisations. Alongside this, they are creating and cultivating their own visions of the future by promoting the concept of energy sovereignty. This is based upon the belief that energy is a common good and should therefore be in the hands of the people rather than the financial elites.  Fernando Cabrera succinctly summarised the future they are pushing for, one based on six demands: democratise, de-commodify, de-privatise, de-fossilise, de-monopolise and decentralise.

In solidarity with all those organising for climate justice in Latin America!