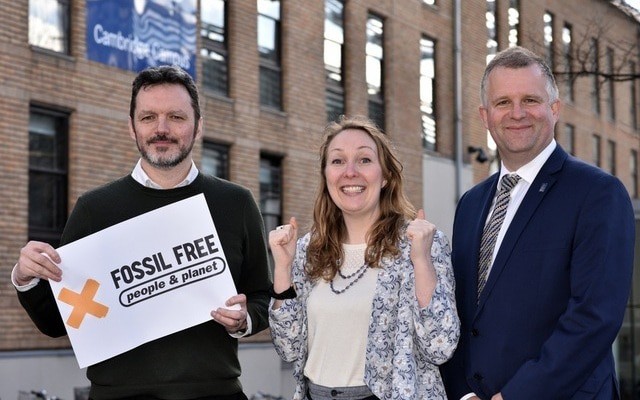 Vice President Robbiie Young shares his top three updates on the Emissions Impossible: Divest-Invest campaign, in the fifth edition of this monthly blog.

In the hottest April on record in nearly 70 years � #climatechange - here are my top three updates:

1. We have had three sensational announcements, from institutions where students have been organising on long and protracted campaigns. In March both Cardiff and Durham committed to divestment from all fossil fuels, with Durham�s announcement including the intention of �becoming a major partner in the future development of green energy.� Alongside Durham and Cardiff, Bristol announced they would be transforming their partial divestment of coal and tar sands, to a divestment from all fossil fuels. These campaigns evidence the power of using a diversity of tactics, from creative and direct action to using the position that student officers have to represent the will of students on university committees. They also speak to the power of using the different spheres of influence students and officers have within institutions, and what can happen when they are linked up, as well as giving us hope for those campaigns which continue to be advanced in the face of university inaction - such as with the phenomenal escalation campaign currently being progressed at the University of Cambridge.

As Megan Croll, President of Durham Students� Union, said: �I�m delighted that student ambitions for a fossil-fuel-free investment policy at Durham University have been realised.

�This success shows the power that students and staff, working together, have to make our community more progressive and responsible. I�d like to pay tribute to the student leaders that have put considerable effort into this work, notably the Durham SU People and Planet Society."

We will soon be hosting a case study interview with organisers from the Durham campaign so we�ll be sure to share this as soon as it is available.

Huge congratulations to everyone involved in making these divestment dreams a reality and for anyone who wishes to get support campaigning get in touch with us and/or check out our resources page.

2. Alongside these announcements Anglia Ruskin became the tenth signatory to NUS and People & Planet's Fossil Fuel Declaration. By adding their name, Anglia Ruskin have not only confirmed their current fossil free status, but their commitment to remaining so in the future. Of the announcement, Professor Aled Jones, Director of the Global Sustainability Institute, said: �The Fossil Fuel Declaration is not just a recognition of the importance that students place on their university�s wider global responsibility but also that as the world has signed up to transition to a low carbon future these types of investment represent a risk in the short to medium term as policies align with this new future.

�As a university, Anglia Ruskin is proud to have a diverse community, with students from all over the world.  The impact of climate change on their home countries ranges enormously but trying to keep any such impact to a minimum is of course important. We are also delighted that our students have been instrumental in driving this initiative, in particular MSc Sustainability student Sarah Elizabeth Greenfield Clark�.

To find out more and whether you are at a university that could sign the declaration check out how to take action here.

3. We have co-hosted a webinar with People & Planet aimed at engaging sustainability managers within our institutions. This was with a view to both create another pressure point for divest-invest within our educational establishments and to provide students with further support to achieve this. We have more webinars planned, which will be aimed at various stakeholders within our institutions, so we�ll be sure to share when they�ll be taking place.