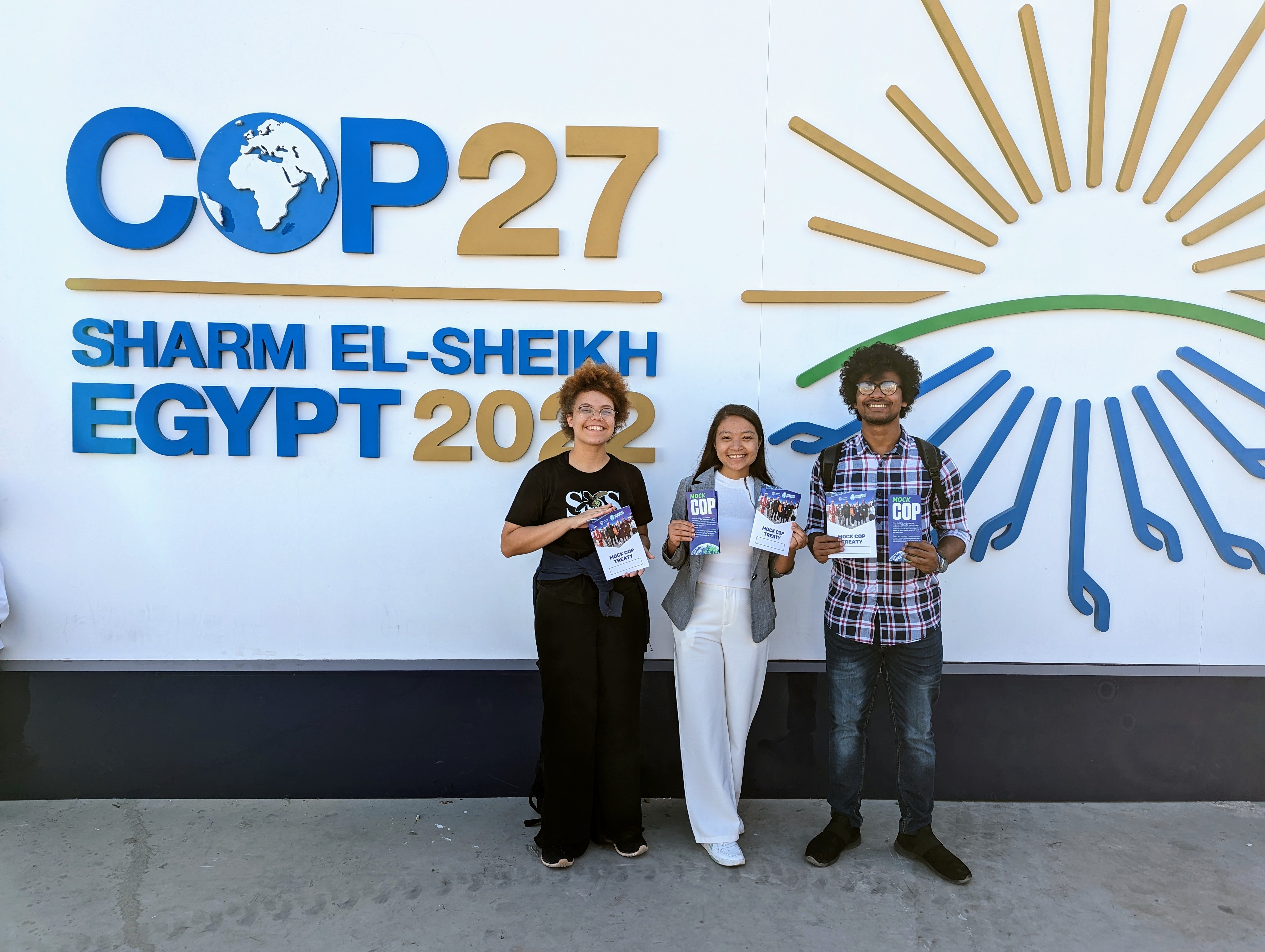 Six of Mock COP’s campaign coordinators, along with three of SOS-UK's core staff have been at the 2022 United Nations Climate Change Conference, COP27 in Sharm El Sheikh, Egypt. We have been building on our achievements at COP26 and since, with a particular focus on enabling meaningful youth presence, voice, and leadership through decision making, as well as advocating for climate education and implementation of the Mock COP treaty.

It has been a busy couple of weeks and below is an overview of what the team got up to and achieved.

·        It was exciting to be a youth partner through Mock COP for the first ever Children and Youth Pavilion at COP – a space full of energy, creativity, support and solidarity. This vital space helped youth climate campaigners from across the world to connect, share ideas, celebrate, learn and create positive energy and hope which is needed to further climate action. In this space, Mock COP co-hosted an intergenerational dialogue on Youth Momentum for Climate Education with the International Federation of Red Cross and Red Crescent Societies (IFRC). Several of the Mock COP Campaign Coordinators served as the daily youth spokespeople for the Youth Pavilion. We’re grateful to the Children’s Investment Fund Foundation (CIFF) for investing in this space and hope to see it continue at future COPs.

·        We are delighted to see education increasingly present in climate discussions, actions and policies, such as the launch of UNESCO’s research Youth demands for quality climate change education and launch of Youth Climate Justice Study, with the UN Youth Advisory Groups and CIFF. SOS-UK and Mock COP’s campaigning has been recognised as a driving force for climate education to be prioritised at COP, especially following our work with the UK government at COP26 where we hosted the first-ever Environment and Education Ministers’ Summit. Our team were invited to speak on several climate education focussed panels, including the launch of the Greening Education Partnership with UNESCO and the launch of the Green Jobs for Youth Pact with UNEP, UNICEF, and the International Labour Organisation.

·        It was a great outcome that young people now have official recognition as stakeholders in the ACE Action Plan.

·        We hosted our own event in partnership with the British Council and UK Department for Education. Our Climate Education Policy Showcase celebrated how youth and governments are working together to progress climate education, with representatives from the UK, Liberia and Finland sharing the important steps they have taken. This demonstrated how young people and education ministries can meaningfully collaborate on climate education policies.

Our engagement with government officials and key decision makers:

·        There was great progress made on education at COP26 in Glasgow, where Mock COP was the youth partner in the first-ever Education and Environment Minister's Summit. We were disappointed that it did not make it on the official programme this year and much of the increased presence of climate education took place in side events. We are hopeful education will feature in the official programme and negotiations at COP28 next year in UAE. To support this to happen, some of our work at COP27 included meeting with education ministers and government representatives from the UK and UAE to discuss how we can prioritise education further at COP28, and will continue to work with the UK and UAE and partners to prioritise education in the run up to, and at COP28, particularly looking at how we can support young people to meaningfully engage and shape education commitments.

·        We spoke to government officials and world leaders over the two weeks, sharing the Mock COP treaty and how it is being implemented on the ground.

·        Our team also spoke at a number of events with government officials, including:

o  Porag organised and spoke on the first-ever youth panel at Bangladesh Pavilion;

o  Mohab spoke at the Canada Pavilion youth panel with the Minister of Environment and Climate Change;

o  And Shreya spoke in the Nature Zone on “repairing our world to avoid runway climate change”.

The six campaign coordinators have been sharing their experiences during COP27 on social media so if you want to hear more from them and what they got up to, check out their profiles below, or visit the Mock COP Instagram page for general updates and reflections.

SOS-UK pays Mock COP campaign coordinators a UK real living wage and financially supported their time at COP27, as well as supporting some other youth, such as Fridays For Future Pakistan campaigners. Help us to keep meaningful youth voice central in these spaces, by contributing to the Mock COP crowdfunder set up by the coordinators.

What are our plans and hopes for the year ahead?

·        COP15 (the UN Biodiversity Conference) is just around the corner in Montreal this December. Two Mock COP campaigners will be attending to advocate for the two biodiversity policy asks featured in the Mock COP treaty.

·        We’re scaling up local action with Teach the Teacher and Teach the Parent across the world, giving young people a tangible way to take impactful action for climate education within their communities.

·        We’re continuing to support young people globally to engage with their governments on the Mock COP treaty, particularly our first two asks on climate education.

·        And, finally, we will re-group following a busy and exciting two weeks to plan how we can grow and create meaningful change with Mock COP phase four and work towards COP28!