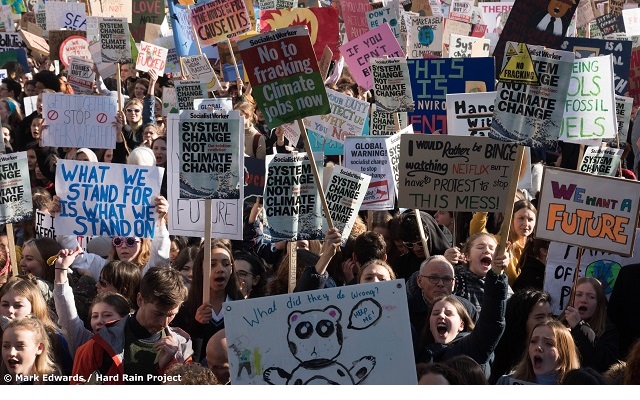 On 15 February 2019, over 15,000 students and young people around the UK joined a global youth movement calling for governments to address the climate crisis with the urgency it deserves. This bold and brave action garnered headlines not only across the country, but around the world and deservedly so for the courage this generation is showing. On 15 March 2019 students will once again ditch the classroom and lecture theatres as part of a globally coordinated day of action in which youth movements in over 55 countries will be calling for the same demand, urgent action to address the climate crisis.

NUS supports the demonstrations on 15 March 2019 as part of the Youth Strike 4 Climate in the UK. Students and young people have a crucial part to play in defining the political landscape, and we welcome positive and bold climate action, calling on governments and those in positions of power to act on climate breakdown.

Climate change and the ensuing climate crisis is the biggest existential threat to the future of students and young people in the UK and around the world. Numerous international agreements, summits and conferences have tried and failed to adequately address the crisis. We currently find ourselves facing the very real and immediate prospect of ecological breakdown, a drastically changing climate, and huge uncertainty. Without urgent and radical reform to restructure our economic systems along environmental principles, young people today will grow up to live in a radically different world.

�NUS fully support the aims of the UKSCN and the demonstrations taking place on 15 March. We encourage all those who care about the impact of climate change on the future of our planet, students and young people, to take part in the demonstrations and to make their voices heard.

�NUS recognised the importance of sustainability many years ago, and has been campaigning on these issues for nearly half a century. As a founder of Votes at 16, we encourage all those in positions of power to hear the concerns of young people and act.

�The next generation of voters are speaking and demanding action. We stand with them.�

�Our actions on 15th February demonstrated not only our understanding of the climate crisis, but our determination to hold those in power to account for their climate betrayal. Students and young people want to see change, and to have the backing of the National Union of Students adds more weight behind our calls for the government to treat climate change with the severity it deserves.�