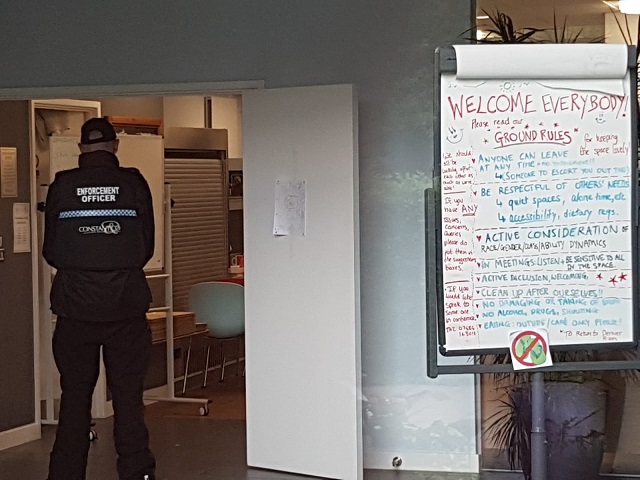 Cambridge University took the unprecedented step today of forcibly evicting a group of peaceful student protesters from an occupation of its most important administrative building. The eviction came after activists from Cambridge Zero Carbon Society occupied Greenwich House, an organisational hub which houses over 400 staff including the University�s Finance and Human Resources departments, last Friday. They had demanded full divestment from fossil fuels ahead of a crucial meeting of University Council on Monday. High court bailiffs working for Constant & Co, a company that specialises in traveller evictions, entered the building this afternoon while around 20 students remained passively and peacefully in the building.

A spokesperson for Cambridge Zero Carbon Society said: �The University today chose force and violence instead of engagement and negotiation. Students occupied Greenwich House because every democratic channel they have pursued over 3 years has been ignored. The University council could not even reach a decision on divestment on Monday and now instead of negotiating they resorted to force against their students.

�The University�s executive has shown itself to be cynical and incompetent. Today it put its investments in fossil fuels once again over its own students, demonstrating its priorities through physical force. We will continue to escalate and pursue means of democratic engagement until the University commits to full divestment.�

In the week before Monday�s meeting, three students committed to a six-day hunger strike, thirty activists chalk-sprayed a central University building with pro-divestment messages, and hundreds of staff and students rallied outside the meeting, setting off orange smoke grenades and demanding that Council should not �betray our future�.

Yet campaigners were left with their demands unaddressed when Council failed to reach a decision, instead receiving notification that a decision on divestment would be delayed to an unspecified later date and that management was fast-tracking an end to the occupation of Greenwich House. In anticipation of the eviction, students and staff last night held a rally in central Cambridge demanding �Cops Off Campus�, and nearly one hundred academics signed an open letter in support of the occupation. Ignoring these calls for a dialogue between management and the occupiers, the University instead pursued a court order to dissipate the occupation, which came into effect this afternoon.

Greenwich House�s occupation comes in the context of the recent escalation of a three-year campaign by Cambridge Zero Carbon. Last year, the University�s governing body, Regent House � an academics� council which is purportedly �the embodiment of the University as a democratic institution� � successfully passed a motion for fossil fuel divestment. Side-stepping the decision, Council established a working group, a leaked report which failed to advocate full divestment, instead recommending measures such as �carbon neutrality� as late as 2040 and a 10% ESG fund not even guaranteed to be fossil free. Over 350 academics, including Sir David King, Sir Tom Blundell and Robert Macfarlane, signed an open letter last month calling on the University to adhere to the grace, and a students� petition secured over 2000 signatures.

A further statement can be found on the Zero Carbon society page.