Can the world afford to eat sustainable food 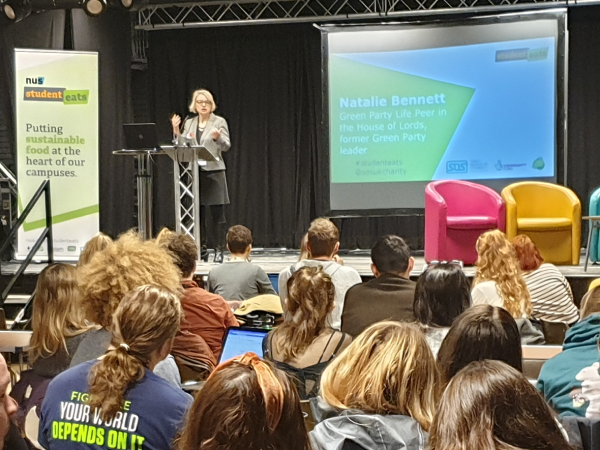 By Ellie Brown, from Penryn Produce*, a student-led organisation that provides local, seasonal and minimally packaged produce for collection every week. They work in partnership with local growers to promote healthy and sustainable living.

On the 5th November, Student Eats held its annual conference, this time with the University of Sheffield hosting. It was a day long event, with the hope being people from all across the country would be bought together to talk about sustainable food and be inspired with more knowledge, ideas and solutions. As a branch of NUS and now Students Organising for Sustainability (SOS), Student Eats has helped university groups sell over 120,000 worth of sustainable food, improved 58 growing sites and enabled people to volunteer over 25000 hours to projects really creating a positive difference, all within the last 3 years. The day highlighted the power of networking and sharing in generating impactful moves toward a better food system, both from within universities and independent initiatives.

The University of Sheffield have been very active in improving their food system on campus, as was explained by the Development Officer, Harry; a zero-waste shop and close linking between the student union and the university are two ways a fairer and greener food system is being created here. I'd journeyed up from Falmouth/Exeter Universities campus in Penryn, Cornwall and seeing what other universities were achieving and the parallels between this and what is being dreamed of within our campus, was very exciting.

Many topics were covered on the day, across a huge range of workshops and panels - it was really difficult to choose which to attend. Take away messages included how it isn't just what we eat, but how it has been produced: monocultures of intensively grown crops are not the solution, nor is vegan fast food. We also covered how shaming the farmers for chemical covered crops is not productive, when supermarkets are driving prices of often unseasonal food down, putting farmer's trying to make a living in difficult positions, whilst simultaneously wasting food and presenting it in unsustainable plastic. It was emphasised by key note speaker and former Green Party leader, Natalie Bennett, that unlike flying or driving cars, we cannot stop eating and everyone will continue to do so. As a result, it is important to have these conversations about how to make food better, and what better way to do that than over... cake?

When we start picking apart the issue, we see it is symptomatic of a fundamentally flawed system - one that prioritises profit over people. Until we achieve climate justice, a buzzword of the day, we will not have sustainable food. Climate justice seeks to recognise that those least responsible for the climate crisis, are the most adversely affected. This is the poorest of society, the minorities, and the Global South that aren't exploiting our planet to make profit. The necessity of our food system becoming a more conscious one, is as much for people as for the planet. One of the questions a workshop asked was: Can the world afford to eat sustainable food? I would ask, how can it not? For the world to sustain us, we must eat what is sustainable, and that isn't always going to be the cheapest food. Within the UK we spend a proportionally small amount of our income on the food we consume, relative to other Western countries. Often, however, we hear the need to make our food cheaper. Presently to eat organic, whole foods, can cost double if not triple that of the cheapest, processed foods. So then when you have a family to feed, when you are on the poverty line, the choice is made for you whether to eat well or not. When we as humans barely have enough to make ends meet (or should I say 'ends-meat'?), eating food that comes from a sustainable system is apparently too much of a luxury. I and those at the conference, don't believe it should or needs to be this way.

Food waste is a huge problem in this country at the same time as food poverty, and there are many fantastic ways to address this mismatch. We have enough good food, but we don't distribute it to those in need, with much of it being ploughed back into fields or decomposing in landfill. I learnt about the concept of 'Gleaning' whereby food that is going to be left to rot or be thrown-away is collected and redistributed to those in need. Those in cities also often are within 'food deserts' which means they cannot buy local food - one solution from Joe of Middlesbrough Environment City was that we just need more growers! The expanding movement of Community Supported Agriculture schemes means communities can eat affordable local food and develop a relationship with the grower, which alongside Gleaning Groups, provides small beacons of home to making our food system better.

Celebrating diversity is such a key part of the solution to the problem - we need to celebrate the diversity of life. One of the workshops I attended was on seed saving by Adam Alexander and consolidating what Natalie Bennett had already informed us: health and resilience of an ecosystem and society is based on diversity. The Green Revolution further reduced our food diversity since the beginning of agriculture - we now receive 20% of our calories from wheat alone, when hunter-gathers in New Guinea can identify and consume 2000 different varieties of food! Seed savers such as Adam are inspiring in their work protecting rare varieties of seed and the culture and history that is within them. We should advocate for variety and not allow modernisation and intensification of agriculture to continue to reduce our choice of food.

Although government needs to make a sustainable food system a priority, it was important to be reminded that change doesn't work when it is just imposed from the top down - Meat Free Monday's mission to encourage less meat consumption can bring about backlash if done in a way those affected see as removing free choice. Making the vegetarian options more appealing and showcasing the solutions as too good to miss, whilst educating people on the impact what they eat has on the planet, are ways we will continue to fix and better our food system and society. A nice quote I picked up during the day was 'politics should be what you do, not what is done to you' - empower people to make better choices and be a part of solutions.

In one day, I had scribbled many notes consisting of exciting facts and ideas, met my No Dig hero Charles Dowding and felt full with inspiration. Although the day was largely an echo chamber, where most people attending were already active in creating solutions to make our food system better and held similar ideas on what the problems were, I am sure it was a day that provided all that attended the energy and motivation to keep finding purpose working with food, in the many diverse and varied ways this can entail. It's delicious knowing that a better food system not only nourishes society but will allow for the world to do so for generations to come.

*Penryn Produce is a food enterprise, part of the Our Bright Future programme, which is funded by the National Lottery Community Fund.