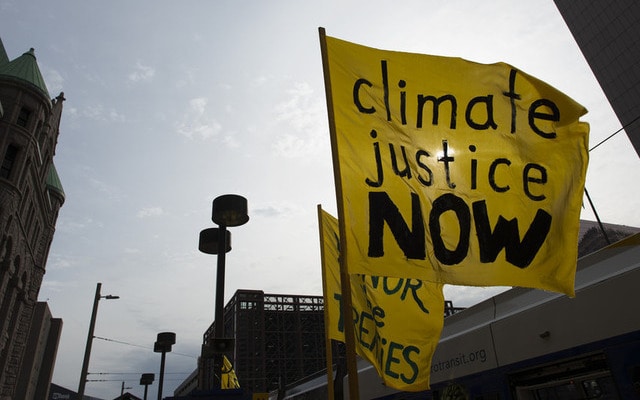 Across the world, Black and Brown communities are forced to leave their homes as a result of the actions of Western countries. Families ripped apart, villages left abandoned, and people dying as they are forced to become climate migrants and refugees - fleeing the uncontrolled impact we are having on the planet. From the USA to the UK, Bangladesh to Sudan, Gaza to Somalia; Black, Brown and poor communities bear the brunt of the decisions made predominantly by the West.

For many years, groups in the West have been calling for action on climate change. What hasn�t often been apparent is the fact that people on the frontlines, most affected by climate change, are also leading the fight against it � for climate justice. These people are overwhelmingly people of colour.

A few months ago, the founders of Black Lives Matter wrote about this with reference to forced climate migration from Sudan. Those fleeing are met with fortress Europe, closing its borders and leaving them to drown in the Mediterranean. Black Lives Matter highlighted the fact that systems of inequality across the globe mean it is communities of colour and working class communities facing the brunt of climate change. They are most affected, and least supported.

In Bangladesh, research shows that the entire country could be underwater by 2100 - with some predicting the majority could be underwater by 2050. In Flint, a majority black city in the US in which almost half of the population lives below the poverty line, a water crisis has led to fatal health conditions casued by toxicity. Palenstians are faced with water scarcity - exacerbated by climate change - and those in Gaza, one of the most densely populated places on Earth, face restrictions on their water use. Consistently, the areas hit by the most extreme weather - floods in Houston, USA or Nigeria, mudslides in Sierra Leone, or hurricanes in the Caribbean - are home to communitities of colour and poor communities.

Climate change -related issues in the UK disproportionately harm poor, Black and Brown communities, too. Research shows that in England the most deprived communities, which have a disproportionate number of people of colour, face higher air pollution levels. Air pollution is linked to many forms of ill health, including higher risk of respiratory and cardiovascular diseases, especially for more vulnerable groups such as children and the elderly. A recent study showed that black people in London account for 13.3% of the population, but 15.3% of the people exposed to nitrogen dioxide levels that breach EU limits.