Climate Justice for Who 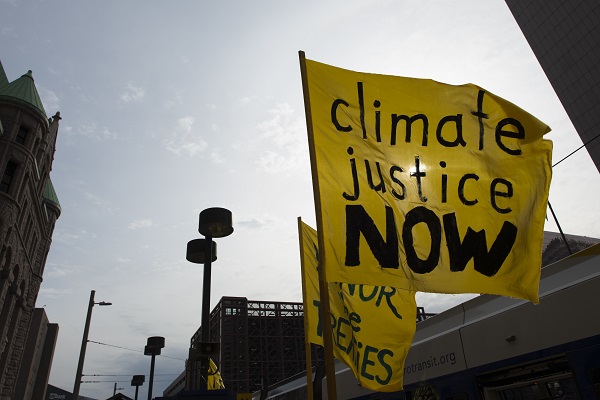 At the Student Sustainability Summit on the 4th November 2019, Fope Olaleye, NUS Black Students� Officer, chaired a panel called �Climate Justice for Who?'. In conversation with Fope, was Muna Suleiman from Friends of the Earth and Angus Satow who is a Green New Deal activist. Below is an overview of what got discussed�

This piece summarises, paraphrases and brings into dialogue the points made by the panellists during their discussion. It is important to note that Friends of the Earth do not � and cannot � endorse all of the views represented here. They are not party political. As such, please read with awareness that some of the views expressed are not endorsed by all panellists.

What does climate justice mean to you?

Climate justice is about the �who� and the �how�, i.e. who is it for and how do we achieve it? For example, climate justice in the UK is about ensuring that those in fuel poverty benefit from how we respond to the climate crisis. For this we need an energy system that responds to both the climate crisis and the social crisis of 4 million people in fuel poverty. This means we need energy fuelled by renewables sources, that are also distributed and owned by people, not profiteering corporates. Otherwise, we face folk still being unable to afford to heat their homes despite it being from clean energy sources.

On a global scale it�s also about re-distributing power and wealth. About challenging the unequal system that the climate crisis has been created by: neoliberal capitalism. It is this system that allows the fossil fuel industry to operate based on neo-colonial business models of dispossession, oppression and complicity in state-sanctioned violence. Despite the well documented indigenous and human rights abuses exacted on frontline communities by the industry, companies like Shell and BP continue to operate with little accountability. And accountable they should be. For they are also the leading contributors to the climate crisis, with just 100 fossil fuel companies being responsible for 71% of global carbon emissions since 1988. Already those communities most affected by the climate crisis are the least responsible for its creation. These communities are disproportionately communities of colour based in the Global South and the indigenous North. Climate justice requires the status quo to be transformed for everybody, not just those in positions of power, as we move to a low-carbon world.

To what extent do current climate change-related campaigns ground themselves in climate justice?

It is notable that the majority of NGOs are talking about austerity as distinct from the climate, whereas black and brown activists have done a lot to embed the climate crisis as part wider narratives around race, class, colonialism and more. COP (international climate talks) offers an opportunity to not just talk about the climate, but also about the oppressions facing us all that intersect with this. It is interesting that we talk about the environmental movement as a whole when NGO practises are quite distinct from the grassroots. The NGO sector needs to be a lot more diverse. People impacted by the crisis need to be in the room and leading the conversations and decisions about what actions we take to tackle it.

Such an approach is fundamental to climate justice, and will also help groups to avoid the kind of mistakes that Extinction Rebellion activists made when they targeted a tube train in Canning Town. This is a predominantly working-class area and led to a community being impacted who are not causing the crisis and are much more likely to be impacted by it. Whilst the response to the protesters was harsh, it was also emblematic of a climate movement focused on a single issue which ignores the role of power and capitalism, which are at the root of this crisis. To properly ground climate campaigns in climate justice the spaces we create to organise in must include those who most feel the sharp end of injustice. Our work must seek to transform - not replicate - the current power structures society is built upon.

What groups/campaigns would you recommend folk checking out?

Wretched of the Earth. UK Student Climate Network (�UKSCN�)... who from the very beginning had the thread of climate justice being migrant justice as part of their narrative and work. Any campaigns and/or groups who are amplifying the work of indigenous and/or frontline communities.

There is an emerging sense of solidarity as folk see how different struggles are interconnected. When we look at the injustices related to migration, one cannot dismiss the fact that the climate crisis is driving people from their homes and destroying their livelihoods. Then, when those individuals seek safety in the Global North they are faced with harsh border regimes. Therefore, it is important that we acknowledge that climate change is not just about science and carbon emissions, but about inequity and imbalances in the scales of global power distribution.

Furthermore, at the heart of all this is the City of London and its rampant capitalism which sees profit placed far above people. Only by fighting together can we win. We must build a movement inclusive of all - from the person on a zero hours contract trying to make sure they get to work on time in Canning Town to the frontline organiser facing harsh State repression in the Niger Delta.

How do we embed climate justice?

It is great that in this room we have a bunch of politically committed activists, but we must use this as a base to go further. We need to build a mass movement. What we need is for the climate movement to go beyond itself as a single issue and link with others to build a strong and relentless social justice movement.

Our demands need to respond to people�s everyday experiences. For example, �free energy as a human right,'' the impacts of air pollution from airport expansion, free, publicly owned transport and free, public, green spaces. To embed climate justice, we also need to be challenging the rhetoric that the UK is a global climate leader and it is India and China who are most responsible for emissions. This is fundamentally not true, given the UK�s historic role in driving fossil fuel extraction. The climate crisis is not an isolated crisis, it is embedded in a system of oppression. We need to connect the dots for people. We need to change the conversation.

Do you see a link between climate justice and fighting against the rise of the far right?

Of course! This is not a sudden dystopia. Where we are now is based on injustice getting worse and worse. The seeds of climate apartheid have already been planted - borders around the UK are being strengthened and we have only hit one degree warming so far. Unless we abolish borders we face even more folk dying who just want to be able to embrace their right to live. It is absolutely no coincidence that the rise of borders has coincided with increasing societal injustice. We have a great number of ugly currents running through society right now, based on a competition of scarcity where the system divides us against each other. What we need is an acknowledgement that the �migrant is not my enemy, but my comrade and neighbour�.

As we shift away from a fossil fuel dependent economy we need to ensure that transition is �just� - simultaneously equitable for all and carbon neutral by 2030. In the 2000s the environmental movement - NGOs and activists alike - were coalescing around the phrase �no jobs on a dead planet.� In response the Unions were pushing back, trying hard to protect their members� interests. This displays the necessity of a worker-led transition and displays the important work of climate-organising folk working in coalition with trade unions. A �just transition� - one that includes everyone and not just the privileged few - would mean folk working in fossil fuel-intensive industries would be supported to retrain and apply their skills to low-carbon industries, like renewable energy production.

What would a community/society look like that was grounded in community and collective care?

Green jobs have got to include those beyond the energy industry - from nurses and doctors to mechanics and bakers. We need to build a society in which all needs are met. We need to challenge the systemic underfunding of care and youth services. And we need to remember that it�s not just about renewables, but about transforming the system. We are aiming for a society that is greener and fairer. With clean air and clean water. Right now, the people of Flint, Michigan still do not have access to the latter which displays environmental racism in action. Public transport also needs to be made accessible for all, because it is a sector that is still slacking meaning poor and disabled folk still have to rely on cars. We also need to tackle fast fashion, which is one of the most polluting industries. To ground this in community and collective care we need to unite and fight on multiple fronts, for the society we envision.

Give one recommendation for ensuring climate justice is at the heart of our work.

Whatever you do, ground it in this. Whenever you are in a space, look around. Who are you working with? You can�t speak on behalf of others. �Make sure the spaces you organise in reflect the society you are trying to build.�

Realise all you are fighting is climate justice; police brutality, deportations, austerity etc. Link up with folk organising on the front lines, such as the Movement for the Survival of the Ogoni People. For the stakes at play for them are literally survival. We should be raising up front line struggles. We need to fight against the system that created these contexts in the first place.

And be sure to remember: self and collective care. This needs to be an undercurrent to all we do. For we can�t build a movement with burnt out people. We need to be gentle with ourselves. So, we can be gentle with others.

Huge thanks to Fope, Muna and Angus for sharing their wisdom, and to the University of Sheffield Students� Union for hosting us :)