How close to single-use plastic free can Manchester institutions go 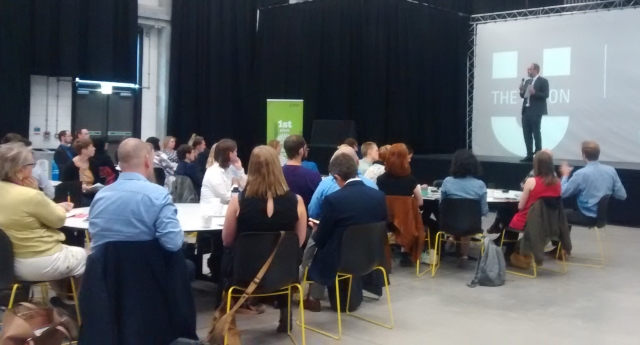 NUS� Student Sustainability Survey told us that 79% of students would support a tax on non-recyclable packaging used and 52% support a ban on single-use plastics altogether.

At a recent Green Summit, Manchester saw the launch of the 'Plastic-Free Greater Manchester' campaign, pledging to work with businesses and the public to end the use of unnecessary single use plastics by 2020. Spurred by this synergy of purpose, today in Manchester, the NUS, the Greater Manchester Combined Authority and Manchester Metropolitan University co-hosted an event with Manchester higher and further education institutions, NUS and institution suppliers to discuss the prospect of working towards the removal of unnecessary single-use plastics

Presentations were provided by Mark Atherton (Environment Director, GMCA), Professor Richard Green (Pro-Vice Chancellor Research and Knowledge Exchange, Manchester Metropolitan University), Julian Kirby (Lead Plastics Campaigner, Friends of the Earth) and a personal video message from the Mayor of Greater Manchester, Andy Burnham. Attendees were asked to consider whether a  how far universities could go in the removal of single-use plastic frees and what is needed to get there. With over 45 attendees and an array of organisations in the room (over 40 attendees), from sustainability leads, student representatives, supplier representatives and NGOs there was general consensus that a single-use plastic free institution is possible, but with the acknowledgement that it will need top level leadership, a strong student voice, collective action across the city, a shared vision and blueprint that we can all work towards, and a step by step approach which develops alongside external innovation. University labs, catering and retail outlets were all identified as key areas of plastics use across further and higher education institutions.

Julian Kirby from Friends of the Earth provided a reminder that the plastic problem is not limited to the single-use plastics items that we most commonly hear about such as straws, coffee cups, plastic bottles; in-fact much of the marine pollution challenge is from microplastics derived from an array of less obvious sources from the heels of our shoes, car tyres, paints, to the polyester fibres in our clothes. Raising the challenge of not a single-use but a plastic pollution free institution.

Oskar Bill Hurst Walin, a student at Man Met commented �It was great to see so many enthusiastic people come together to chat about this issue, it�s something that I know students really care about and I�m keen to see how we as students can help the university implement some big changes in the next academic year�.

Next steps include confirming ambitions and plans with the Mayor of Manchester and developing a collective blue print.

Next steps include collating and analysing the output from the workshop, devising a collective blueprint for what an institution free of single-use plastic & plastic pollution might look like and confirming our ambitions and plans with the Mayor of Greater Manchester.