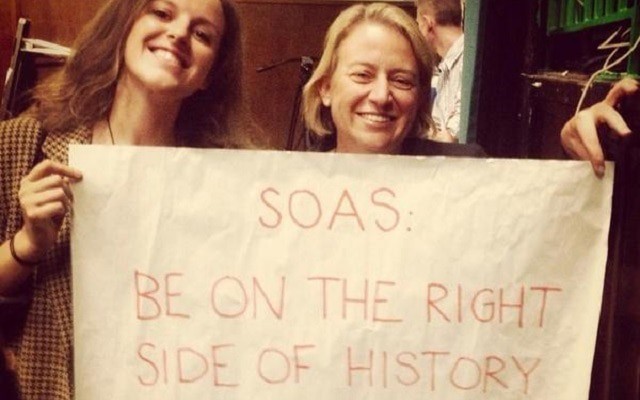 SOAS University of London is pleased to announce that it has fulfilled its promise of March 2015 to divest from fossil fuels within three years. This makes SOAS the first university in London to fulfil its pledge.

The School no longer has investments within the oil and gas producers subsector or any companies that derive more than 10% of their revenues from coal mining, as per the agreed criteria for the fossil free commitment.

The commitment to divest came following a major student-led campaign for the School to remove its fossil fuel investments in 2013 which garnered significant support from the student and staff community and beyond, including from the actor and climate change advocate Mark Ruffalo who tweeted: �Great job on the divestment [tidal] wave!  #SOAS� and the writer and social activist Naomi Klein.

Director of SOAS Baroness Valerie Amos CH said: �It is thanks to our students that we became the first university in London to commit to divesting from fossil fuels. SOAS students care about the future of our planet and push the School to live to its values. I am delighted that we have fulfilled our pledge.�

Hannah Short, SOAS Students' Union Governance & Communications Coordinator, and former SOAS student, who was part of the Fossil Fuel Campaign, said: �It was amazing to join this campaign as a new student at SOAS in 2014, succeed in getting SOAS to commit to divest, and finally now to see it actually carried through. It's important for SOAS to practise what it preaches; challenging behaviour and policies is not just something that happens 'out there', but needs to be done right here at home first. This is just one step on a long journey to being the best institution SOAS can be - particularly when it comes to the morality of its whole investment portfolio, amongst other things - but it's a step in the right direction. It's great that SOAS chose to set a progressive example, and that other universities and institutions are following suit.''

Annie Pickering at People & Planet said: �During this week of divestment wins from Sussex and Edinburgh University, it is great to see SOAS taking the lead among London universities and being the first university in London to fulfil its divestment pledge. Fossil free investments are becoming more and more mainstream."

NUS Vice President Society & Citizenship, Robbiie Young said: �As one of the first universities to commit to full divestment from fossil fuels, it�s great to see that SOAS have moved their money within the three-year timeframe they set out. This comes within weeks of the 60th UK university � Huddersfield � making a commitment to divest, displaying just how powerful this movement has become. SOAS�s success also displays how, through the collective power of students, divestment discussions can lead to transformational projects that form part of the just transition to a low-carbon world. The work of Solar SOAS in getting community-owned renewables on-campus has been pioneering and we hope to see lots more institutions following in their footsteps�.

Sustainability is one of SOAS�s core values. Solar SOAS, a clean energy initiative set up by SOAS students and alumni, in partnership with SOAS and the SOAS Students� Union, became the first community energy project to successfully install community-owned solar panels at a UK university.