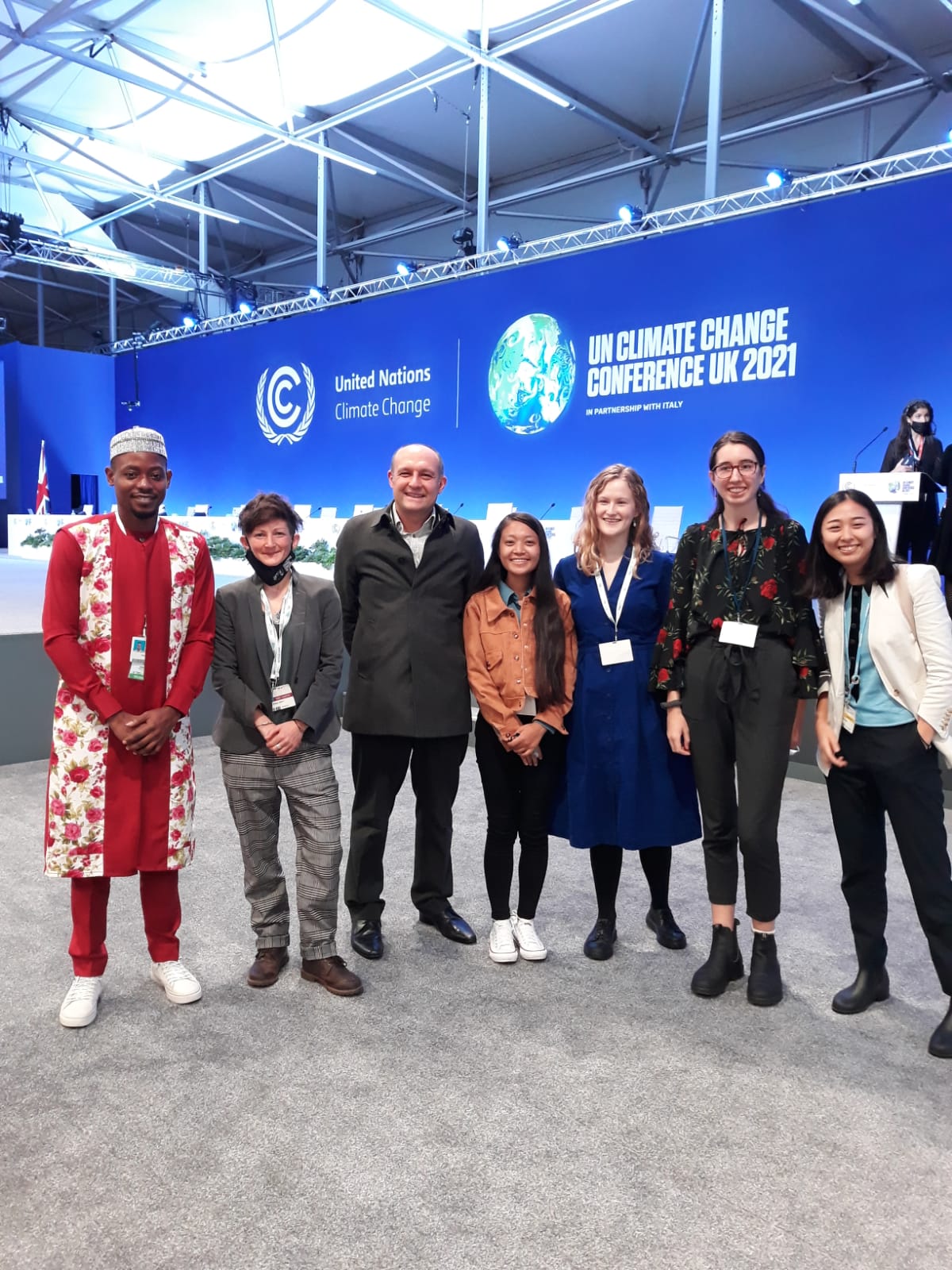 It was a busy couple of weeks at COP26 with SOS-UK supporting and involved in several activities. SOS-UK collaborated with officers at Strathclyde University Students’ Union to host two banner making sessions at the Union ahead of the marches on the 5th and 6th,as well as a discussion between Larissa Kennedy (NUS & SOS-UK President), Matt Crilly (NUS Scotland President) and SU officers on COP26 and the student movement. Thank you to ecoeats (a Circular Economy takeaway platform, offering zero-emission food delivery in reusable ecoboxes) who also provided food for around 50 students who joined the event.

We also supported 10 leading universities, alongside 16 charitable foundations to launch a declaration calling for minimum climate standards from their investment managers. Through this, the investors, who have £7 billion of investments, hope to end the mismatch between investment manager commitments and practice. Read the full declaration.

The Mock COP26 representatives at COP26 are now back with much-needed rest and with new energy, and have shared below everything that they got involved with.

Thank you very much to all of you for supporting and encouraging us throughout COP26 whether by being in-person or from home! Here are the updates about what we did in COP26.

On 3rd November, we showed our 5 “My Climate Reality” VR videos in the Green Zone of COP26. Bea, Jonathan, Daniela, Rakesh, and Txai transports you to the Philippines, Uganda,  Columbia, India, and Brazil to show you what it feels like to be on the front lines of the climate crisis and to work to tackle those impacts.

On 4th November, we delivered Teach the Teacher climate education workshop an invited audience of the permanent secretary of education, Susan Acland-Hood, Children’s Commissioner for England, Rachel de Souza, and other education policy makers and influencers in the UK Government’s Gen Z COP26 classroom which was live-streamed to an audience of up to 10k. Watch the full session here.

On 5th Nov, we organized a panel discussion on “What Does Meaningful Youth Leadership Looks Like?” in the Green Zone. We discussed how activism differs in the global south and north and how young people are making difference by working with the community and the government.

We worked with the UK Presidency, Government of Italy, UNESCO, and Youth4Climate to bring Ministers of Education and Environment together at COP26 to pledge to integrate climate change and sustainability intolearning in formal education systems. Read the declaration from the Education Ministers Summit (EMS), 21 nations provided pledges committing to climate education; you can watch the first set of pledges here and watch the second set of pledges here. Phoebe Hanson was the keynote for youth voice at the event. The UK Department for Education also used the Summit to launch their Sustainability and Climate Change Strategy (draft), a big step towards meeting some of the Asks of our Teach the Future campaign. Watch the full recording of the live stream here.

We advocated with different groups such as YOUNGO, CAN International, Education International, UNICEF to name a few. Main topics we worked on included climate education, meaningful youth participation, loss and damage, action for climate empowerment, and gender justice among others.

We also had opportunity to speak in numerous panel discussions such as “Education in Climate Policies: Are Countries Making the Grade” at the Nature pavilion organized by Education International, “Beyond Rhetoric; Youth Leadership and Climate Action” at Websters theatre organized by Soka Gakkai International UK, and side events such as “The Climate Crisis: A Child Rights Crisis” organized by UNICEF.

We joined various networking events and dinners and met plenty of high-level people such as PM of The Netherlands and Nepal, High-Level Champions, Education Minister of Sierra Leone among others, and other wonderful people from different countries, NGO/INGO representatives, media, youth, and indigenous people, activists, and potential partners for EMS at COP27. We also got plenty of media opportunities such as talking with BBC, Sky News, COP26 TV, UN Podcast among others.

On 5th and 6th Nov, we marched together with millions of strikers in the streets of Glasgow demanding climate justice. We also joined various protests inside-outside the COP venue, to pressurize world leaders not to fail us at COP26.

The challenge of sustainable mobility: the launch of the Green Erasmus survey report

This is one of the projects that we are involved with.

Young people globally have been lobbying their governments for greater climate ambition.

In November 2021, we conducted a survey on student opinions on spiking in the UK. Read about our key findings and conclusions.