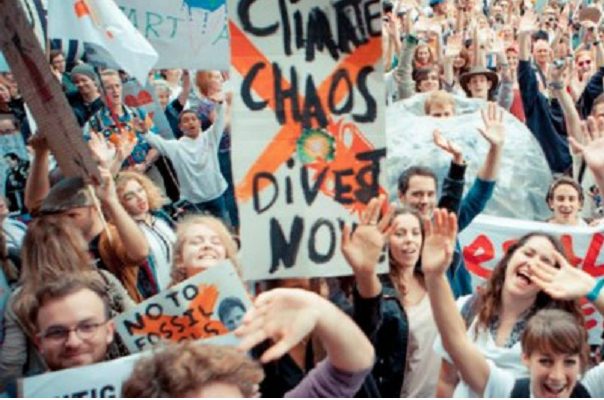 Following an almost nine year campaign led by People and Planet UoM, the University of Manchester have committed to full divestment from the fossil fuel industry by 2022.

The University has announced that it will end investments in fossil fuel reserve and extraction companies by 2022, and �decarbonise� all investments by 2038(1). Students have been campaigning for the University to divest for several years, staging protests and occupations, and showing, once again, how mobilisation and collective power can bring the change we want to see.

The commitment is included in a new Socially Responsible Investment policy, which aims to encourage the transition towards a low carbon economy by redirecting investments into 'companies that are more carbon efficient'(1). The commitment goes further than many divestment announcements, pledging to reduce the carbon intensity of the overall investment portfolio by 30% by 2022, and then to move as quickly as possible to net zero by, at latest, 2038.

Vice-President for Social Responsibility, Professor Nalin Thakkar said: �We will stop investing in companies that hold fossil fuel reserves or are involved in extraction by 2022. However, these account for only 3-5% of our total investments. Since most CO2 emissions do not arise from the direct activity of fossil fuel companies, but through the use of fossil fuels by others, we will also take the more ambitious step to shift our investments to carbon efficient companies. We believe this is a more radical, comprehensive and justified approach than disinvestment based on fossil fuel extraction alone.�(1)

The policy review which has led to this announcement, was agreed to after a week long occupation of the University's finance boardroom by student activists from People and Planet UoM(2). Of the divestment, People and Planet UoM have said: "This is a huge victory for us! Thank you to everyone who has supported this campaign at any stage!"(3)

People and Planet described the announcement as "huge" and have congratulated the UoM group stating: "We are very very proud of all the activists who campaigned for years and never accepted NO as an answer. This is their victory!"(4)