We will not be silenced say Cambridge Zero Carbon Society 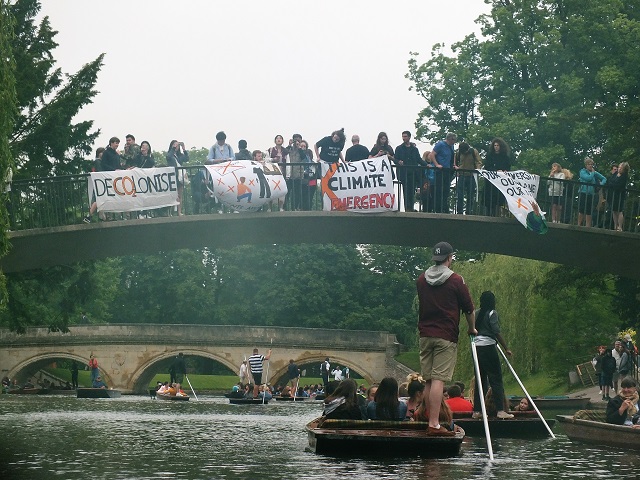 At 2pm on Tuesday over 30 campaigners from Cambridge Zero Carbon Society staged a banner-drop protest on 3 Cambridge bridges. On King�s, Clare, and Garret Hostel bridge, students let down multiple banners with messages such as �Racist investments, racist policing�, �Our University, Our Planet, Our Future�, and set off brightly coloured flares.

This protest came in light of a delayed divestment decision from Monday�s University Council meeting, followed by the forced eviction of the Greenwich House occupation.

Rufus Jordana said, �The University purports to defend freedom of speech only so long as that speech isn�t questioning its power. The eviction by high court bailiffs was traumatic for all students involved, and it is telling that the University is willing to intimidate and use force on its own members who question its investments in an industry which kills thousands each year. In this aggressive defence of its immoral priorities, the University of Cambridge has shown its true colours.�

Rahma Alfarsy, a spokesperson for Zero Carbon Society said: �These dismissive proposals were rejected because University Councillors know that students will not accept them. Anything less than full divestment is to embrace catastrophic climate change and that is something we cannot accept.  Students are not afraid of management�s threats and will not be silenced � that was affirmed beautifully in the colourful protest today. We will continue to lobby councillors and use the pressure of direct actions to strive towards the just and sustainable future we need, and to put our University on the right side of history.�

Recently, the divestment movement has escalated its action and level of support. Last week student activists spray-chalked Old Schools, with three students hunger striking for six days followed by a week-long occupation of Greenwich House. Two-hundred students turned up for the �Divestment D-Day� rally on Monday, and a hundred more for an emergency rally against the Greenwich House eviction.

A large rally is expected to take place outside Senate House again tomorrow to protest against the force used against students at the Greenwich House eviction, and the University�s failure to negotiate.

Information about the rally can be found here.