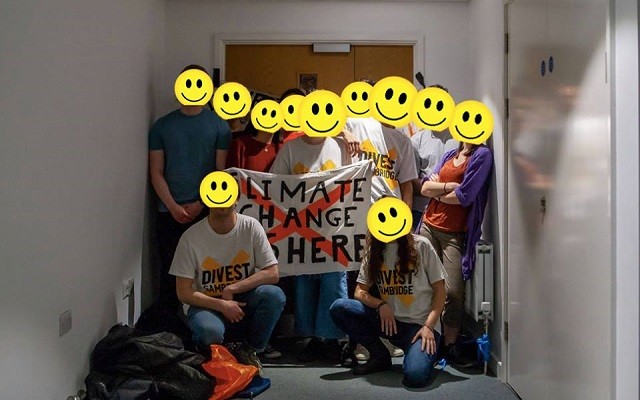 We�ve blockaded this space and shut down its operations to send a clear message. Business as usual cannot continue and we will keep disrupting until this university divests!

We're currently in the middle of escalating our campaign calling for Cambridge to divest its whopping �6.3 million endowment from fossil fuels.

We really think we might be close. Three years of campaigning, have been met with three years of stubborn resistance, but next Monday (23rd April 2018), University Council will be discussing the findings of the latest working group and a decision is due soon.

There's such a strong case for divestment here in Cambridge that anything other than a commitment will be met with uproar. Staff and students have democratically voted in favour of divestment time and time again. This week, 300 academics are publishing an open letter and our new petition has passed a thousand signatories. We�ve made the arguments as clear as possible in our published reports.

We're pushing for justice in the university's investment portfolio. But we also see this issue as linked with so many others. We want democracy and accountability in all decision-making. We want a more open university where resources are accessible to non-members and members alike. We want the university to move beyond its liberal environmentalism that seems more concerned with reusable cups than the destruction of ecosystems and indigenous communities. We need to build a university that fights against the fossil fuel capitalist agenda, rather than chumming up to its major companies.

We've been so glad to build dialogues with other Fossil Free Campaigns and with groups around the world, especially the inspiring Movement for the Survival of the Ogoni People in Nigeria, who are challenging Shell head on for its role in the devastation of their environment. They report 200 people dying every week from the pollution damage. Their activism is inspiring - check it out!